Does Lack of Sleep Make You Fat? 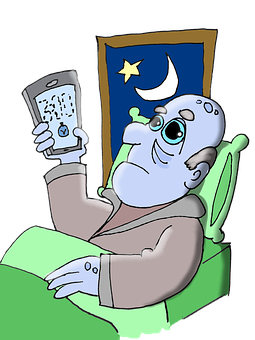 Does skipping a few hours with the Sandman make you gain weight? Yes, it probably does. It seems counter-intuitive. After all, if you’re awake, you could engage in activities that actually burn more calories than simply dreaming about doing things. However, that’s not really the way your body works. If you don’t let your body sleep enough, you’re going to experience some unpleasant effects, and one of them is weight gain and associated problems. Learn more about how a lack of sleep can make you fat.

The first explanation for how a lack of sleep can make you gain weight might be the obvious one. Who hasn’t woken up in the middle of the night and figured a late-night snack is just the ticket to help calm down? If you’re hungry or craving certain kinds of food, maybe you should eat something light.

Some good examples might include a serving of fruit or low-fat protein. In some cases, you might just be thirsty and need a couple of swallows of water. Be wary of drinking too much because that’s likely to cause you to wake up again for an urgent visit to the restroom. The problem is that once you get out of bed and start wandering around your house, the harder time you will probably have getting back to sleep quickly.

The Real Problem: Lack of Sleep Messes Up Your Hormones

You can find plenty of credible studies that find sleep deprivation and disturbances promote weight gain. Conversely, healthier diets and weight loss have even been founded to improve sleep. It’s a win-win situation if you can get your sleep and your healthy lifestyle to work together. With that said, it’s not always easy.

The lack of sleep changes your hormones. Men’s Health pointed out that this may work differently in men and women as well. In a sleep study of both men and women:

You Might Not Feel Hungry; But You’re Eating More

You might not even consciously feel hungry, but you’re probably eating more when you lack sleep. In the study reported upon above, the people in the study didn’t say they felt hungry. However, they ate an average of 300 more calories a day. Over time, that 300 calories will add up and start packing on pounds.

That’s why it’s so difficult for people to understand that sleep deprivation is making them gain weight. They don’t feel hungry, but somehow, they’re still getting a message to eat more.

How to Cure the Sleep Deprivation Fat-Gaining Blues

Obviously, your first step is to figure out how you can get enough sleep. Most people need at least seven or eight hours a night. If you skimp once in awhile, you probably won’t suffer many ill effect, but the study found changes after only FOUR days of sleeping less than they should. If you can’t get to sleep, you might even visit your doctor to ask for some help.

If you’ve got to snack at night, stock the fridge with healthy snacks. A handful of grapes or nuts might be good suggestions. An entire pie is not such a great idea. You get the idea. Also, the researchers suggested some moderate exercise because activity can burn calories and may help you get to sleep faster.

Is the Keto Diet Healthy or Unhealthy?
Is the Eco Atkins Diet the Vegan Keto Solution?
The Diet Failure Statistics Infographic
Are Keto Diets Safe?

Hello, and welcome to Cravings Cured! I’m a health journalist and ex-dieter. I hope you join me as we explore ways to stay fit and enjoy food again.

Scroll back to top